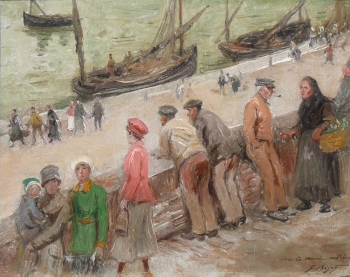 He was a French painter and sketch artist, he resided in Japan from 1882-1899. Initially, he taught drawing at the National Military Academy. He married in Japan and had a son, Maurice. Georges Bigot and Charles Wirgman are both noted for their satirical sketch art in Japan. In Japan, Bigot's art appeared in a number of works. It is said that he published over 30 books/albums with his sketch art. Additionally, it is believed that he published or contributed to over 100 different periodicals (most in Japan and a few in Europe). In 1899 he divorced his wife, Masu, and departed Japan with his son. He returned to France where he remarried and began a career producing satirical drawings (Epinal prints), sketches for magazines and later landscape paintings. Many of the landscapes were of Japanese scenes.