Figures on a Beach 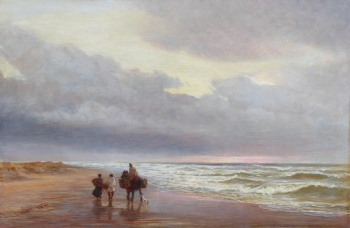 Burt was a Midlands landscape painter. Born in Wolverhampton, he lived in Birmingham most of his life. He was a pupil of Samuel Lines of Birmingham and also a friend and pupil of David Cox (q.v.), by whose style he was greatly influenced. He exhibited 16 paintings at the Royal Academy from 1850 to 1892, as well as at the British Institute, Suffolk Street and elsewhere. He was elected a member of the Birmingham Society of Artists. C T Burt painted highland and farming scenes, and moorland landscapes, including around Snowden in North Wales, in Devon, Somerset, Malvern, Yorkshire, Derbyshire and the Orkney islands.