Cattle Watering from a River 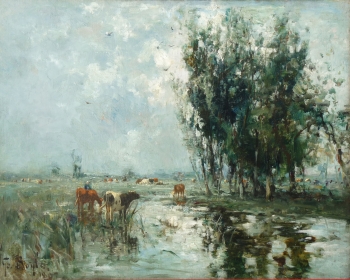 He was a pioneering 19th century British artist inspired by the European Impressionist painters.

Sometimes he is known as the ‘English Corot’ as the influence of the French Barbizon school is very evident in his work.

He often rejected the studio environment to paint ‘En Plein Air’ creating his characteristic atmospheric impressionist studies of the British landscape.
He is recorded as living in London and exhibited at Royal Academy, Royal Society of British Artists, Royal Society of Oil Painters.

Click here to view all available works by George A. Boyle