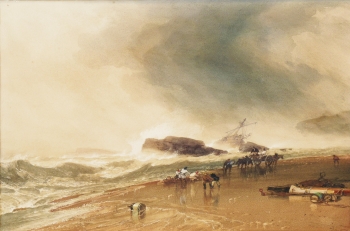 The son and grandson of actors and theatre managers, William Roxby Beverley began his career as a painter of scenery for the theatre, and continued to work in this field throughout his life. Indeed, his reputation was established by his renown as a scene painter, and in particular his skill in rendering atmospheric effects. (An obituary published in the Daily Telegraph in 1889 described Beverley as the ‘long acknowledged chief and doyen of English scenic artists’, although the author also noted his ‘noble water-colours done in leisure hours.’) Beverley began to produce landscape watercolours under the influence of Clarkson Stanfield, also a former scene painter whom he joined on sketching tours, as well as Richard Parkes Bonington. Although Beverley began exhibiting his marine watercolours from 1831 onwards, he continued to make his living as both a scene painter and, occasionally, as an actor. By 1846 he had settled in London, and was engaged as scenic director at several theatres, notably at Covent Garden and Drury Lane. By comparison with many of his fellow artists, however, Beverley produced relatively few watercolours, as he was kept busy by the demands on his time as a theatrical painter and scenographer. Nevertheless, as one early critic had noted, ‘Beverley painted water-colour pictures of rare and delicate beauty, works which alone should suffice to win for him a place in the front rank among our masters of water-colour art.’