Study for the Good Samaritan 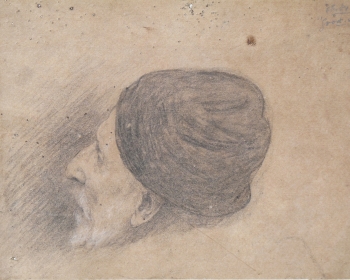 Previously at the Mall Galleries

Stott was born William Edward Stott in Rochdale, later becoming known by his middle name to avoid confusion with his fellow artist William Stott of Oldham. A lack of family support for his creativity resulted in him spending several years working in his father’s office before he was able to pursue his artistic career, which he began by studying part-time at Manchester Academy of Fine Art. In 1880 he moved to Paris where he studied at the atelier of Carolus-Duran, progressing onto the Ecole des Beaux Arts, under the artist Alexandre Cabanel. While undertaking this formal training Stott became acquainted with recent developments in French art and he made frequent visits to the French countryside producing works that stood alongside those made at the same time by artists such as George Clausen, Stanhope Forbes and Henry Herbert La Thangue. He was one of this important generation of British artists trained in Paris whose works were inspired by the naturalism of Jules Bastien-Lepage and the Impressionism of Claude Monet. During this period Stott had his work accepted for exhibition at the Paris salon, and at least one painting accepted by the Royal Academy in London in 1883. He was elected an Associate Royal Academician in 1906.