Swans on a Lake 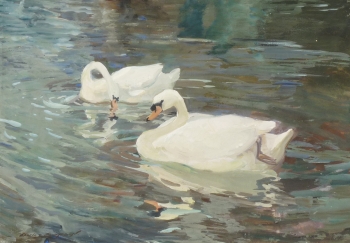 Born in Camberly in Surrey, Simpson was the son of an Army Major-General and, as an artist, was largely self-taught but he studied for a while in 1904 at Bushey under Lucy Kemp-Welch, the well-known horse painter. He first came to Cornwall in 1905, staying initially at Tregethas Farm, and became involved with both the Newlyn and St Ives art colonies, taking lessons from Noble Barlow. In 1910, he studied briefly in Paris at Julian's Academy and, on his return, he became engaged to Ruth Alison, a fellow artist, just a couple of days after first meeting her. They were married in 1913, living first in Newlyn and then in Lamorna at 'Bodriggy'. Simpson relished painting en plein air and Laura Knight commented, "He was so prodigal with paint, he could be traced by the colour left on the bushes!". In 1915, he was awarded a gold medal at the Panama-Pacific International Exposition in San Francisco and, the following year, Ruth and he moved to St Ives to set up their own School of Painting, which they ran from Nos 1 and 2 Piazza Studios until 1924. During this period, Simpson dominated the St Ives art scene, often working on a grand scale, and he won a silver medal at the Paris Salon in 1923 and a gold medal at the VIII Olympiad in Paris in 1924.