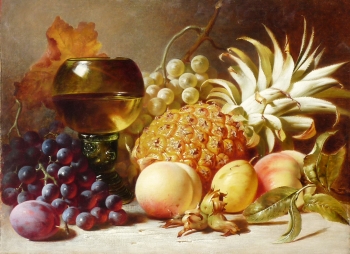 Edward Ladell’s obituary in The Essex County Standard considered him ‘the foremost man of his day in fruit painting.’ He was entirely self-taught, having initially followed the profession of his father, Christmas Ladell, as a coachbuilder. A native of Colchester, he moved to Torquay and later to Exeter where he took a studio at 20 Queen’s Street. He exhibited at the Royal Academy between 1856 and 1886, and also at the British Institute, the Royal Society of British Artists, Suffolk Street and local West Country venues. Ladell became immensely successful and the finest English still life painter of his generation.