Ships off a Headland 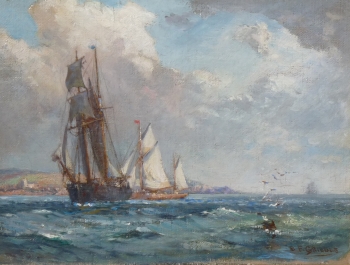 He was raised in South Kensington, where he studied at the school of art, under Albert Toft. He took to art as a scholarly profession, studying for a time in Belgium before heading for London. Exposed to the height of British marine painting, he settled in Dorset, becoming a resident artist capable of portraits, architectural work and especially marine scenes. His maritime works were often focused on historical events.