The Harbour at Lyme Regis 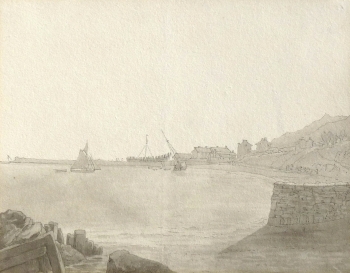 A friend & pupil of F. Towne, he was educated & spent nearly all of his life in Exeter, where he practiced as a surgeon. In 1791 he made his only extended journey outside the West Country, a sketching tour of Scotland, the Lake District, Lancashire, Derbyshire & Warwickshire. From 1793-1805 he exhibited oil paintings at the Royal Academy, as an honorary exhibitor. In 1797 he toured Monmouthshire, and again in 1827 when he also visited Gloucestershire & Wiltshire. He exhibited again at the Royal Academy in 1810 & 1822. In 1825 he inherited the estate of Fordlands, near Exeter, and in 1835 he was appointed a Deputy Lieutenant for the County. Examples in the British Museum, Victoria & Albert Museum, Exeter Museum, NG Scotland & elsewhere.