Study of a Boy holding a scroll, & study of a hand 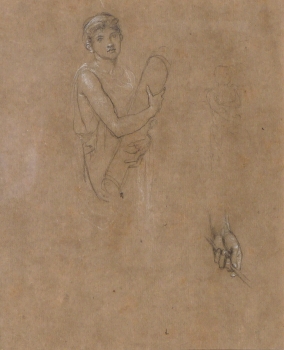 Edward Poynter was the son of the architect Ambrose Poynter. He was born in Paris, though his parents returned to Britain soon after. He was educated at Brighton College and Ipswich School, but left school early for reasons of ill health, spending winters in Madeira and Rome. In 1853 he met Frederick Leighton in Rome, who made a great impression on the 17-year-old Poynter. On his return to London he studied at Leigh's Academy in Newman Street and the Royal Academy Schools, before going to Paris to study in the studio of the classicist painter Charles Gleyre where James McNeill Whistler and George du Maurier were fellow-students. In 1866 Poynter married the famous beauty Agnes MacDonald, daughter of the Rev G B MacDonald of Wolverhampton, and they had three children. Her sister Georgiana married the artist Edward Burne-Jones; her sister Alice was the mother of writer Rudyard Kipling; and her sister Louisa was the mother of three-times Prime Minister of the United Kingdom Stanley Baldwin.