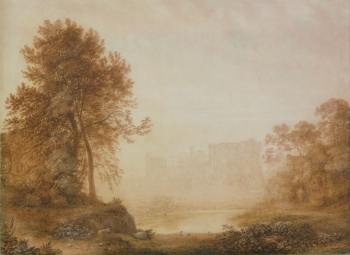 Glover was born in Leicestershire and, although he received a small number of lessons in drawing, was largely self taught. He began exhibiting at the Royal Academy in 1795 and became a founder member of the Old Watercolour Society (O.W.S.) in 1804 moving to London the following year. In 1817 he tried to become a Royal Academician but without success. In 1831 he emigrated to Tasmania (then Van Diemens' Land) where he remained until his death, painting with considerable local recognition, and also sending watercolours of the local area to London for exhibition and sale. Glover was greatly influenced by Claude Lorrain (1600-1682) and indeed became known as 'The English Claude'

Click here to view all available works by John Glover