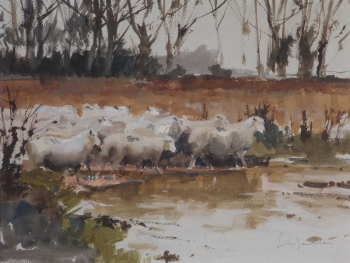 John Yardley is one of the most accomplished and versatile watercolourists of his generation. Renowned for his outstanding ability to capture the vitality of a scene with a few well-placed brush strokes, his particular skill lies in drawing the eye into a composition by painting a passage of bright colour among muted tones, or conveying movement with a confident sweep of paint. His artistic impulse is to paint what he sees with little embellishment and by drawing his subject, then painting it in one quick and direct application, he achieves a definitive sense of movement which is true both to him and to the medium. Having had no formal training and maintaining that this has given him the freedom to find his own style, John Yardley firmly believes in the power of learning by example. A native of Beverley, Yorkshire; John is married with three children and has lived in Reigate, Surrey for since 1961.

Click here to view all available works by John Yardley