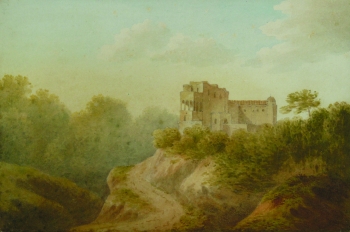 He was a marine & landscape painter in watercolour & oil. Second son of Nathan Theodore Fielding. He studied under his father & John Varley. In 1810 he began to exhibit at the RWS, where he exhibited most during his career, often sending 40 or 50 a year. He became a full member of this society in 1813, secretary in 1813 & president from 1831 to his death. He exhibited only 17 paintings, all oils, at the RA, from 1811-42. He was one of the most fashionable drawing masters of his day. In 1824 he was awarded a medal at the Paris Salon, with constable & Bonington. His best subjects were views of the Sussex Downs, but also storm scenes at sea, & drawings of lake & mountain scenery in Scotland, Wales & the North of England. He also painted a few Italian scenes, but these were from sketches of others. He was championed by Ruskin:- No man has ever given, with the same flashing freedom, the race of the running tide under a stiff breeze, nor caught, with the same grace & precision, the curvature of the breaking wave, arrested or accelerated by the wind