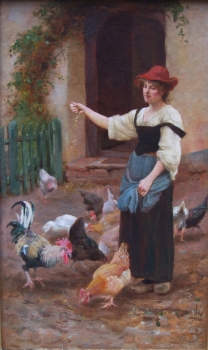 He was born in London, the son of a linen draper. Much against his father's wishes, Fletcher studied at South Kensington School of Art from age sixteen to twenty, where he won the Silver Medal and the Queen's prize. During that period he also visited Brittany and made acquaintance with Stanhope Forbes and his friends. At Verlat's Academie Royale in Antwerp he joined the life class and made firm friends with Frank Bramley, Frederick Hall and Walter Osborne. He spent some time painting at Pont-Aven and Dinan in France, befriending Frederick Millard and meeting Jules Bastien-Lepage along the way. In the RA shows of 1884, he was to show four paintings executed at Pont Aven and Quimperle, three of which were immediately purchased. He then spent eight months of 1885 in Newlyn working on a single large canvas - Dame Grigson's Academy - before leaving the artists' colony forever. Stanhope Forbes described him as 'a good friend, but morose.' He continued to travel, mainly in the rural areas of Berkshire, sometimes with Walter Osborne, and after some foreign travel married his fiancée of six years, Norah Harris. They continued to travel to such an extent that they thought of themselves as wandering artists. He exhibited mainly at the Royal Academy.